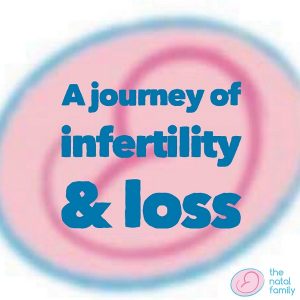 If I wind the clock back 15 years Steve and I were setting off on a journey into parenthood and were very excited about our plans. I would simply stop taking the pill and pregnancy would surely follow within a few months. We were healthy, I was taking my folic acid and was eating as healthily as I could. I envisaged at least three children if not more, twins run in my family, so I had even allowed myself to imagine that exciting prospect. Being a mother was the one thing that I had always been certain about doing in life and Steve felt very much the same about the prospect of being a Dad.

As it turned out, our journey to parenthood would be much less straightforward than we had envisaged and would take a much more challenging, emotional and arduous journey. 18 months later we stepped into the fertility clinic waiting room for the first time and entered a world that would take over our lives. That waiting room was full of others in the same position, undergoing treatment and interventions in a hopeful bid to realise their dreams of becoming parents. That day was the first point at which we realised we were not alone; I attended dozens and dozens of appointments over the three or so years that were undergoing treatment and every time the waiting room was full. Full of men and women, all literally waiting to become parents.

Following various initial tests, procedures and scans our consultant informed us that we had ‘unexplained infertility’ which somehow made things harder. If they had found a problem, there could have been a solution, an operation, an injection, but our issue was seemingly invisible and therefore untreatable. We had three rounds of IUI (Intra Uterine Insemination) and then three gruelling rounds of IVF (In Vitro Fertilisation), all of which were sadly unsuccessful. There had been a glimmer of hope in one perfect fertilised embryo, it came from the final IVF cycle, from the only egg that they were ever able to collect from me during my three years of treatment. I have a much-treasured photograph of that single embryo, on which we hung such hopes and dreams, which were sadly crushed two days later when we received the devastating call to say that it had stopped dividing in the laboratory, so was no longer viable to implant back in me.

The very happy end result of that part of our journey is our much adored and loved 7-year-old son Jack who we are so very grateful to have here with us. He has brought so much joy to our lives and made us incredibly happy parents as we had always dreamt we would be. I made many lovely friends on our infertility journey, and many of them were not as lucky as we were, so we are very appreciative of the luck that we had, because all of the statistics at that point gave us no chance of pregnancy.

Jack wasn’t conceived during our time undergoing treatment; we finished all of the treatment at the end of 2010, pretty much broken. Broken as individuals, broken as a couple, and our dreams of being parents broken. We were not in a place where we were ready to discuss other options such as embryo adoption, egg donation, or fostering/adopting babies or children as the consultant had suggested, we could barely look at each other. A period of healing and time out followed, I left my stressful job and we focused on each other and our new puppy.

Just under a year later aged 40 I found myself pregnant, without any ‘help’ or treatment, with much disbelief and fear that it couldn’t possibly be real. Thankfully it was, and Jack was born nine months later; we were relieved that he was here and that after so many years of heartache and sadness our journey was over. We enjoyed getting to know him and thoughts of trying to get pregnant were gone forever as far as I was concerned, we revelled in this new exciting world of parenthood and all that it brings. I was loving this new world of parenthood so much that I made the decision to change my career path and trained with The Natal Family, allowing me to work with and support other expectant parents. As he grew up and birthdays came and went, we dared to allow ourselves to dream of a sibling and hoped that our luck might strike again. It did so twice more in the following years, but sadly both times ended in early losses, very difficult for us as they are for all couples going through any kind of loss.

We are now in a place of acceptance and happiness moving forward in life as a family of three, helped enormously by supporting each other, and the joy that Jack brings us. My work with The Natal Family has played a huge part in my healing as well. Being part of our wonderful family, being able to support other parents on their journey towards parenthood and working with and supporting our wonderful BabyNatal and MummyNatal practitioners around the UK has been a very important part of that journey. I have also personally benefited from many of the things that we practice in our classes such as mindfulness, which allowed me to pay attention to my feelings and to know what I needed.

Chatting to other parents about different types of losses the sense of loss can be so widespread and complex. Parents who have a child or children and wanted more but for practical, financial or medical reasons could not have more may feel a sense of grief and loss for what might have been. Those parents who particularly longed for a boy or a girl and didn’t have one may feel grief or loss. It can be hard moving forward when your family isn’t able to be what you once dreamt of or planned. Loss and grief are so complex, so very personal and can touch so many of us in so many unique ways.

Sharon lives in Wiltshire with her husband Steve, son Jack and Labrador Poppy.